What Are the Challenges in Diagnosing Multiple Sclerosis?

Multiple Sclerosis (MS) is a complex and unpredictable disease that can be difficult to diagnose.1-3

Despite a range of technological advances in recent years, there is still no single test that can be used to definitively confirm MS.1

In the absence of a clear biomarker,1,4 diagnosis may involve considering all of the following:

The most commonly used guidelines, the McDonald criteria, were first introduced in 2001 with 3 subsequent updates.1,6

In addition, while it is important to consider both WM and GM damage when looking at radiographic evidence,5 GM lesions can be difficult to detect, even when using the latest technology.5 While this may not prevent a definitive diagnosis, it can preclude a full understanding of the patient’s condition.

The Importance of Early Diagnosis

Multiple Sclerosis (MS) is a complex and progressive neurological disorder that causes permanent damage to both White Matter (WM) and Grey Matter (GM) in the central nervous system (CNS). For most patients with MS, irreversible damage begins early in the course of disease.8-12

Evidence has shown that Early Damage can impact Neurological Reserve—the finite capacity of the brain to remodel itself after injury.2 As the Neurological Reserve is depleted, the debilitating damage of MS becomes more pronounced, manifesting as physical and cognitive impairment.8-12

As a result, it is important to diagnose MS as early as possible.

What Is the Prevalence of MS?

The understanding of the true prevalence of multiple sclerosis (MS) is evolving. A long established figure estimated that there were 300,000 to 400,000 people in the US with MS, while a more recent study by the US Multiple Sclerosis Prevalence Workgroup reported the figure to be potentially more than 900,000.13

Discover More About MS and Its Impact

The Most Common Early Symptoms of MS

How Is MS Diagnosed?

Although Multiple Sclerosis (MS) can be difficult to diagnose, the process has been made easier and more accurate over time with the introduction of the McDonald criteria.1 This simple, focused approach has been widely embraced by the medical community and is commonly used in both clinical research and in day-to-day practice.

Today, patients with MS are being diagnosed

Overall, the McDonald criteria have helped to bring some consistency to the diagnostic process and has significantly reduced the time it takes to confirm MS in patients presenting with symptoms.9 In the United States neurologists are diagnosing MS 10x faster than in the 1980s, which means that more patients are being treated in the early stages of disease.9

Evidence of disease activity over time—months or years

The McDonald Criteria for Diagnosing MS1

Either of the Following:

Either of the Following:

One of the Following:

In the end, diagnosing MS quickly and accurately is vitally important because the long-term consequences of early damage can be devastating for patients. With each new iteration of the McDonald criteria, it becomes increasingly more valuable as a diagnostic tool.

More Information on the Long-term Consequences of Early Damage

The Role of Imaging in MS Diagnosis

The development of magnetic resonance imaging (MRI) revolutionized the process of diagnosing Multiple Sclerosis (MS). Using MRI technology, clinicians have been able to clearly visualize lesion activity in the White Matter (WM) of the brain and spinal cord. As a result, MRI evidence has quickly become the gold standard for diagnosing patients with MS.19 While Grey Matter (GM) lesions have historically been difficult to visualize, recent advances in MRI technology have improved our ability to detect them.5

MRI Images of WM Lesions in a Patient With MS20

While magnetic resonance imaging (MRI) has been a powerful tool for visualizing White Matter (WM) pathology, it has not been as effective in visualizing Grey Matter (GM) pathology, which is essential to understanding MS. GM lesions can be difficult to image because they tend to be smaller, with a less severe degree of inflammation.24

As evidence continues to accumulate about the importance of GM pathology in MS, the need to accurately image GM lesions is greater than ever. For instance, research has found that intracortical lesions discovered using DIR and PSIR are correlated with cognitive impairment in patients with MS.26

While clinical symptoms and CNS imaging are the most important factors in diagnosing Multiple Sclerosis (MS), laboratory tests can also play a role. Some tests commonly used to help confirm a diagnosis of MS include1,2,16,27,28:

The most commonly used laboratory tests to help diagnose MS involve the use of CSF, which is obtained from the patient through a lumbar puncture. The CSF is then processed and analyzed for signs of elevated gamma globulin proteins or oligoclonal banding. The presence of oligoclonal banding in CSF is considered a hallmark sign of MS, with 90% of patients with MS testing positive for this disease marker.18,27 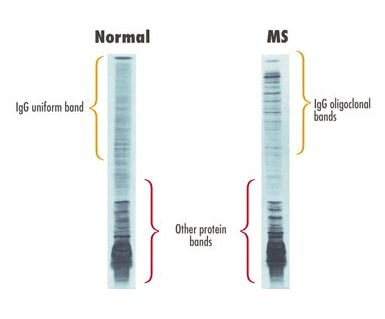 Oligoclonal banding is found in 90% of patients with MS29

Evoked potential tests measure how quickly electrical impulses travel through the CNS. These tests use sensory stimulation (lights, sounds, touch) to trigger a response in the patient showing any abnormalities in neurological conduction. With EP tests, the accuracy rate for diagnosing MS is between 67% and 85%.16,30,31

OCT is an imaging technique that uses near-infrared light to measure the thickness of retinal nerves and detect neurological damage at the back of the eye. This technique is accurate, fast, noninvasive, and relatively inexpensive.32

In patients with MS, research suggests that OCT imaging can be used to predict both visual function and broader disability progression.32

The Problem of Misdiagnosis

While the process for diagnosing Multiple Sclerosis (MS) has improved significantly over the past 20 years, misdiagnosis continues to be a problem. An estimated 5% to 10% of patients diagnosed with MS are later found to have a different condition.33 Alternately, one study of 50 patients with MS found that 58% were previously misdiagnosed as having other conditions including psychiatric disorders, orthopedic problems, and viral infections.34

Among patients who are misdiagnosed, the disorders most commonly mistaken for MS include33,35:

In some cases, these patients may remain misdiagnosed for as long as 10 to 15 years. During this time, patients are often treated with medications that are inappropriate for their condition. In a 2015 study of 110 misdiagnosed patients, 33% remained diagnosed with the wrong condition for more than 10 years.35 For these misdiagnosed patients, there can be significant clinical, economic, emotional, and psychosocial consequences.2

Despite advances in technology and process, Multiple Sclerosis (MS) remains a difficult condition to diagnose. It is a complex and unpredictable autoimmune disease with high variability from patient to patient.1-3 Furthermore, there are other neurological diseases that mimic its pathology and symptomatology.1,2

The most common factors contributing to misdiagnosis of MS are2,35:

If observed symptoms are believed to be caused by an indeterminate demyelinating event, clinicians should immediately begin classifying them as either typical or atypical for MS.3 Typical symptoms include visual disturbances, numbness or tingling, motor difficulties, and fatigue. If symptoms are not typical, it should raise suspicion.9

>50% of cases were attributed to MRI misinterpretation35

In patients with MS, MRI evidence typically includes well-circumscribed ovoid brain lesions that are periventricular, juxtacortical, or infratentorial. Spinal lesions are typically short (1 or fewer vertebrate segments) and tend to be located within the cervical or thoracic region of the spinal cord. Evidence of 2 or more of these lesions in different locations present clear evidence of dissemination in time, making it strongly suggestive of MS, rather than a different neurological disorder.26

Are You a Healthcare Professional?